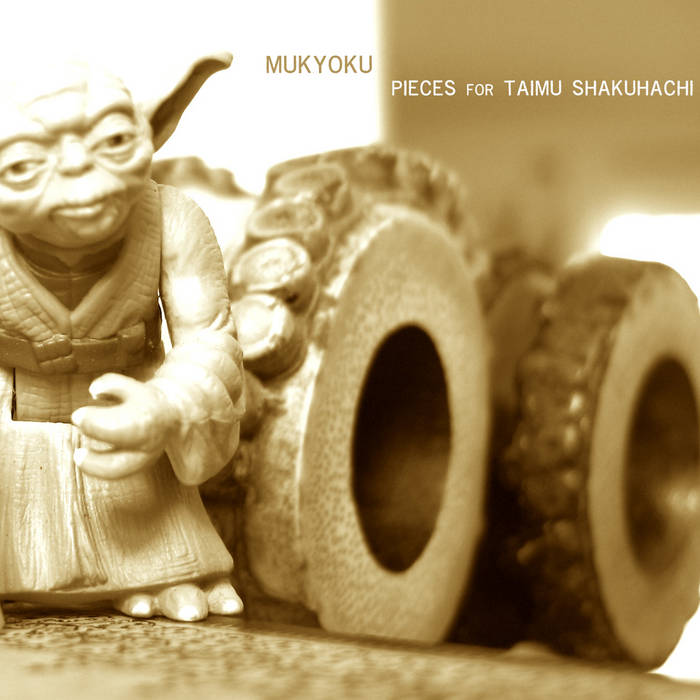 ​A training and performance repertoire for Taimu shakuhachi. 27 compositions of varying difficulty levels designed specifically for large-bore or lower-pitched shakuhachi flutes. However, these pieces can effectively be played on any size or type of shakuhachi or hotchiku to improve breath control, tone, melodic sensibility, or simply to increase repertoire. They are intended to complement any honkyoku or other pieces that you might be studying or playing on the Taimu, shakuhachi, or hocchiku. The primary stylistic inspirations are honkyoku and Mississippi blues, and many of the pieces are simply structured long tones with some melodic shaping. If you have not yet entered the Taimu realm (or the fat flutes are too fat for you), any shakuhachi/hocchiku (especially 2.4 or larger) will work well with these pieces, but as Chikuzen Sensei points out, certain flutes fit certain songs, and vice-versa; also the flute/player connection will determine what songs are more appropriate at any given time.
​
These pieces are written as études, or learning pieces, specifically for the large-bore, lower-pitched Taimu shakuhachi flutes. They vary in difficulty level but all of them can be approached slowly or as just a few select phrases that might resonant with your own approach to Taimu. The priority of all of these pieces is to connect your own essence with the breath, the flute and sound. You are participant and observer, adventurer and audience. As Chikuzen Sensei teaches, you are directing the breath on an adventure that you can hear as it unfolds. In my opinion, when a composer purposefully taps into the strengths and tendencies of an instrument, a real synergy in composition/performance can emerge. This was my intention with all of the mukyoku pieces. The emphasis is on strong, sustained notes, slow moving melodies, and deep breathing.

The Taimu likes for you to approach it more as a force of nature and less as a musical instrument. The Wind is a force of nature that is characterized by unity, direction, and power. The Taimu allows you to focus on unity, direction and power by using breath and sound. Getting to the point where the flute is an extension of your breath and arms is the primary goal. The sounds can be deep, glowing, windy, raw and unpredictable. You can return to the primordial ground, and you can tear your Self down and build yourself back up. In general, the shakuhachi can respond to these approaches as well, but it also doesn’t mind being made exclusively into a musical instrument: the Taimu cannot be approached in that manner with much success. In general, the Taimu is deeper, wider, and engenders a visceral and powerful interaction with the breath.

The term “mukyoku” is used for these pieces in the spirit of honkyoku, sankyoku, dokyoku, sokyoku, etc. and means “music for Taimu”. Also, the term exists as part of a metaphysical language and originally means “the ultimate of infinite non-being.” The term mukyoku appears with a similar usage as the Void, Emptiness or Sunyata; it is usually exploring an ultimate, nonfinite facet of the basic Zen tenet of “emptiness is form, form is emptiness.” It is the emptiness that is the ground of all being, and that to which the myriad things return. Furthermore, in Zen teaching, the myriad things of the cosmos are not different from emptiness (ku) or from nothingness (mu).

THE COMPOSER, THE PROCESS, and THE PURPOSE

Some information about me, Cornelius Boots, will further put these pieces in context. I am a progressive rock composer, a single-reeds and flutes performer and instructor specializing in the bass clarinet, a dabbler in Tibetan mysticism and Taoist wizardry, and a devotee of the Respirational Arts. After completing 3 music degrees at Indiana University (BM Clarinet Performance '97, BS Audio Recording '97, MM Jazz Studies '99), I have studied and explored the shakuhachi for 9 years with Michael Chikuzen Gould, with whom I am currently (August 2010) working towards my Shihan (teaching license). As a composer, I have focused on expanding the repertoire for my own instruments and ensembles of original design, with a special emphasis on the bass clarinet quartet (Edmund Welles) for which I have created 38 original compositions and 21 arrangements since 1996. My most recent ensemble, Sabbaticus Rex, combines shakuhachi and Taimu with large ambient gongs and the Bazantar, an upright bass with additional sympathetic strings.

As an advancing intermediate level shakuhachi player I wanted to improve my connection to these incredible, big Taimu flutes. When the tone is happening, it is really a fantastic sound/sensation. In the course of recent (April 2009) training with Chikuzen Sensei, there was much discussion about the specific tendencies, needs or uses of different flutes. Soon after, I started writing some pieces that felt like the Taimu wanted to play, both as pieces in their own right, and as an additional training grounds to prepare a kind of Taimu-approach for playing honkyoku. In general, the slower tempos and less frequent appearance of meri-notes make mukyoku quite approachable on the fat flutes. Even after spending over a year writing, notating, editing, practicing and recording these mukyoku pieces, they continue to present challenges, increase my connection with the four Taimu that I play, improve my shakuhachi playing in general, and reinvigorate my study and performance of all shakuhachi repertoire.