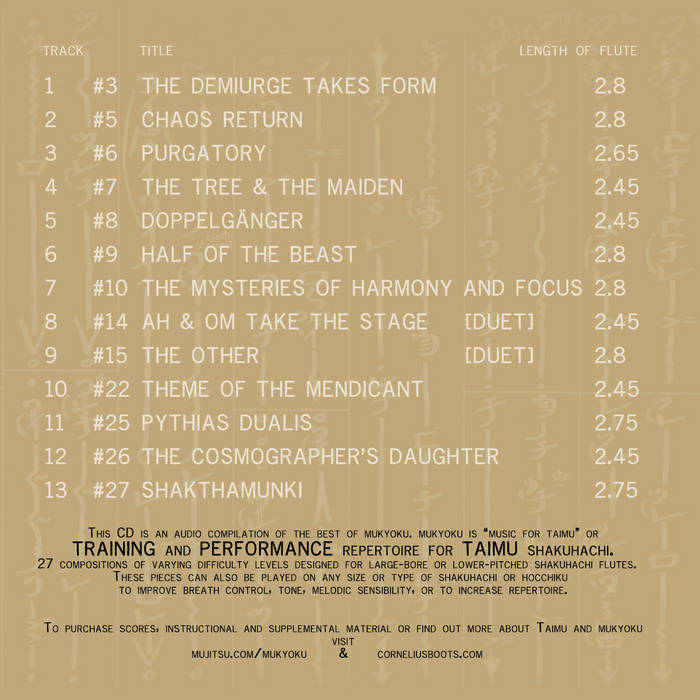 A doppelgänger is a double, a shadow-self, or an evil twin. In general, a direct confrontation with your own doppelgänger indicates that you are now or soon will be dead, and this confrontation with your shadow-self is part of a trial in the in-between- lives state that determines your purity of spirit or true core fortitude. Although most of these pieces were named independently from each other, certain patterns and themes such as Mortality, Duality, Paradox, and Self vs. Other began to emerge as the titles were given. As with the musical style of mukyoku, to the extent that there is a philosophical or thematic aspect to these pieces, it is essentially a personal synthesis of the mythology, psychology, cosmology, ideas and approaches from East and West. I am much more interested in the intersection, overlap and consensus conclusions from multiple doctrines (Christian, Hindu, Buddhist, Pagan, occult, for instance) than I am in their differences or their respective historical practices.

In many ways, this is the most challenging of mukoyku, mostly due to the fact that there are two "expanded" techniques involved. In Western music, the term "extended technique" is used to describe the use of fingering, playing styles or other techniques that were not generally incorporated in the original common practice era of the instrument. For Western flute, for instance, this can include multi-phonics, split-tones, flutter tonguing, mouth percussion, etc. I have come to prefer the term "expanded technique" for methods that serve to open up the possibilities of the instrument as opposed to guiding it down a cul-de- sac of novelty. On shakuhachi, who can really say what creative sounds were made on the flute back in the day? In my imagination there were mad monks and serious samurai who were getting all kinds of crazy sounds on the things. That being said, this piece involves two techniques that are not common in the present performance practice of shakuhachi: playing the flute backwards and circular breathing.

Playing into the flute backwards is a good way of forcing your embouchure and blowing style to really interact with the bamboo in the rawest way possible. If you can get a sound on a few notes with the flute turned backwards, turning it back around forwards will make it seem easy in comparison, and how often can we say that on shakuhachi? This is also an illustration of the shadow-self theme: same flute, same player, but different tone. The circular breathing is not necessary, but a hypnotic effect is created if each of the scalar phrases (the ones with small groups of notes in quick repetition: lines 2-4, 8 into 9, and p.2 bottom of line 6 into 7) are played at an even speed, not too fast, and are unbroken until their conclusion. Although I am an advocate of circular breathing on all wind instruments, and can make my case against its treatment as a novelty or "parlour trick" with great conviction, I have consciously designed mukyoku to be playable in the honkyoku tradition of one phrase per breath for many reasons. A couple of phrases in this piece bypassed this restriction, however, due to the musical effectiveness of playing them strung together without breaks. In line 2 of p.2, cover the filled in holes and side-blow across the center hole for transverse flute effect. Like #7, this piece is structured as more of a song with melodic passages in contrast to the long tone nature of many mukyoku.